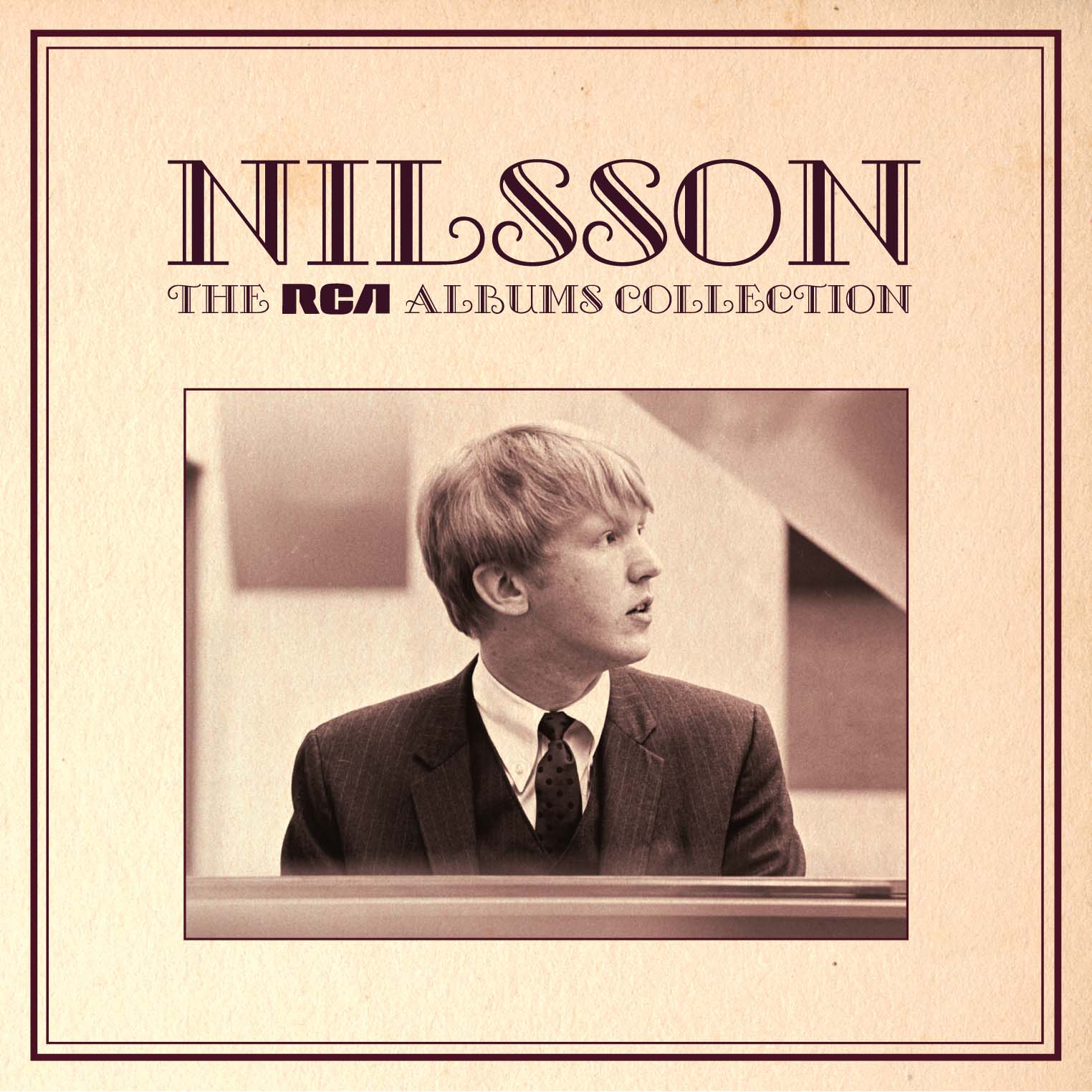 NEW YORK, May 14, 2013 /PRNewswire/ — The profound musical gifts of Harry Nilsson, an artist whose fans ranged from all four Beatles to the Monkees, Randy Newman, Keith Moon, Jimmy Webb, and dozens more, are on full display in THE RCA ALBUMS COLLECTION. This deluxe 17-CD box set will be available everywhere July 30 through RCA/Legacy, a division of SONY MUSIC ENTERTAINMENT.

THE RCA ALBUMS COLLECTION will be a must-have for Nilsson devotees, and a seductive lure for those whose awareness is limited to his Grammy Award®-winning versions of Badfinger’s “Without You” (#1) and Fred Neil’s “Everybody’s Talkin'” (a #6 hit from the soundtrack to Midnight Cowboy, 1969). Then there are the notable covers of his own songs by Three Dog Night (“One”), the Monkees (“Cuddly Toy”), the Yardbirds (“Ten Little Indians”), and Blood, Sweat & Tears (“Without Her”). Others will recall the duo of hits that appeared alongside “Without You” on 1971’s Nilsson Schmilsson album, “Coconut” (#8) and “Jump Into The Fire.” Finally, the playful “Me And My Arrow” (from the soundtrack of his animated film The Point!) and “Girlfriend” (theme of the early ’70s sitcom The Courtship Of Eddie’s Father) have their own coterie of admirers.

THE RCA ALBUMS COLLECTION presents the definitive 14 albums in Nilsson’s RCA Records U.S. discography, from his 1967 debut Pandemonium Shadow Show (among whose high points are his takes on the Beatles’ “You Can’t Do That” and “She’s Leaving Home”) to his final album for the label in 1977, Knnillssonn. Bonus material on those albums add up to 65 tracks, of which 26 are previously unreleased. Adding to the box set’s historical provenance are three newly-compiled CDs, Nilsson Sessions 1967-1968, Nilsson Sessions 1968-1971, and Nilsson Sessions 1971-1974, containing a total of 58 tracks, exactly half of which (29 tracks) are previously unreleased.

The 17 CDs contained in HARRY NILSSON – THE RCA ALBUMS COLLECTION are as follows:

THE RCA ALBUMS COLLECTION is the newest entry in Legacy’s critically acclaimed and commercially successful Complete Album Collections series, introduced in 2011. The album catalogues of rock, pop, jazz, fusion, country, R&B, and classical artists from the Sony Music archives have been handsomely reissued in the series. In every case, each album in the box set is packaged in a replica mini-LP sleeve reproducing that LP’s original front and back cover artwork. Where applicable, the albums in each box include the bonus tracks that have been released on the various expanded CD editions over the years. Booklets are included with each box set, containing new liner notes essays and complete discographical information, including sources for all bonus material.

In the case of Harry Nilsson’s THE RCA ALBUMS COLLECTION, extensive summaries of every album have been written by Andrew Sandoval, who compiled and produced the box set with Rob Santos of Legacy Recordings. Sandoval has previously worked on multiple reissue projects on Nilsson.

Within THE RCA ALBUMS COLLECTION, every one of Nilsson’s 14 original albums is expanded with bonus material, starting with the first two, Pandemonium Shadow Show (1967) and Aerial Ballet (1968). On each of those, the full album sequence is presented in stereo, and then reprised in monaural sound. This marks the mono debuts of both programs in the digital era, and the first time they have been available in mono since their original releases 45-46 years ago, respectively. Aerial Ballet also adds a radio spot ad for the album as a bonus track, and with only a handful of exceptions, radio spots are then included for nearly every album in the box set.

Many of Nilsson’s albums have been the subjects of expanded edition reissues over the years. 1970’s 10-song Nilsson Sings Newman, for example, was reissued in 2000, as part of a Buddah Records series, and was expanded with an 11th song (“Snow”) and alternate versions of four songs. In the same Buddah series of 1999-2000, 1971’s Aerial Pandemonium Ballet added five bonus tracks, but this 2013 version ups the ante with newly-discovered Italian versions of five tunes, plus six tracks (four of which are full-length songs) documenting Nilsson’s visit to the BBC’s Saturday Club with compere Brian Matthew.

Likewise, there is the Buddah series expanded reissue of 1974’s Pussy Cats, produced by John Lennon (who once told a journalist, “Nilsson’s my favorite group”) at studios in Los Angeles and Hollywood in March and April 1974. This was the very beginning of John’s 18-month “Lost Weekend” hiatus from Yoko Ono, when May Pang rented a beach-front house in Santa Monica for John, Ringo, Nilsson, and Keith Moon (all of whom play on Pussy Cats). Listening to Pussy Cats, with its contributions by that all-star cast of “roommates” alongside Jim Keltner, Bobby Keys, Jesse Ed Davis, and others, and its freewheelin’ versions of Jimmy Cliff’s “Many Rivers To Cross,” Bob Dylan’s “Subterranean Homesick Blues,” Doc Pomus’ “Save The Last Dance For Me,” and the bonus tracks of the 1999 Buddah CD reissue, is a heady flashback to 1974.

The dozen swing era standards of 1973’s A Little Touch of Schmilsson in the Night, from Irving Berlin’s “Always” and “What’ll I Do,” to Casablanca’s evocative “As Times Goes By,” could serve as a contemporary template for the likes of Michael Buble, Josh Groban, and Steve Tyrell. The orchestral sessions recorded in London were lushly arranged by veteran Gordon Jenkins (renowned for his long association with Frank Sinatra). The LP also marked the debut of former Beatles press officer Derek Taylor as a producer. (It was Taylor who turned the Beatles on to Nilsson, when he gave them all copies of Pandemonium Shadow Show back in 1967). An entire album of completely different songs from the London sessions was issued by RCA Germany in 1988, A Touch More Schmilsson in the Night. Twenty-five years later in 2013, it provides six bonus tracks, among them “I’m Always Chasing Rainbows,” Bob Hope’s “Thanks For The Memory,” and two by Harold Arlen, “It’s Only A Paper Moon” and “Over The Rainbow.”

Throughout these expanded versions, there are a wealth of demos, single mixes, alternate versions, foreign language versions, radio advertisements, non-U.S. album rarities, and much more. These are put to excellent use on the three compilations entitled Nilsson Sessions (aka Sessions Schmessions). When he was first signed to RCA in early 1967, Nilsson’s humble request was for an office where he could work on his songs. He often answered phone calls there, as many can attest. That office became his laboratory of sorts, and the 18 tracks on Nilsson Sessions 1967-1968 bear witness to his experiments.

The 14 previously unreleased tracks on Nilsson Sessions 1967-1968 begin with five demos taped for the Monkees: “1941,” “World,” “Signs,” “Cuddly Toy” and “This Could Be The Night.” There are three outtakes from his Pandemonium Shadow Show debut, “As I Wander Lonely,” “Miss Butter’s Lament,” and the previously unreleased “The Family.” Early previously unreleased takes of the classics “One,” “Together,” “Bath,” and “I Said Goodbye To Me” did not make the final cut for Aerial Ballet, and are heard here for the first time. Cover attempts of the Coasters’ “Searchin’,” the Addrisi Brothers’ “She’s Just Laughing At Me,” and Procol Harum’s “She Wandered Through The Garden Fence” were all scuttled. Finally, two rare, single-only tracks, “Sister Marie” and the Italian single “Leggenda” make their stereo debuts on Nilsson Sessions 1967-1968.

The release of THE RCA ALBUMS COLLECTION coincides with the July 18th arrival of Nilsson: The Life of a Singer-Songwriter by Alyn Shipton. Published by Oxford University Press, this is the first ever full-length biography of Nilsson, drawing on interviews with family, friends, and associates, plus material from Nilsson’s unfinished autobiography. Shipton is a jazz critic for The Times in London, a jazz presenter on BBC radio, and an award-winning author of more than 20 books on music including Hi-De-Ho: The Life of Cab Calloway (2013), A New History of Jazz (2007), and Groovin’ High: the Life of Dizzy Gillespie (2001). Shipton outlines Nilsson’s fatherless childhood in the Bushwick section of Brooklyn, through his teenage years in Los Angeles where he found his legs as a singer-songwriter, ultimately winding up at the epicenter of the music revolution that engulfed the world in the late 1960s.

Another essential source is the 2010 documentary film, Who Is Harry Nilsson (And Why Is Everybody Talking About Him?). A labor of love by executive producer Lee Blackman, producer-writer-director John Scheinfeld, and producer David Leaf, the two-hour documentary is a detailed and authoritative portrait of Harry Nilsson. Film clips, home movies, family photographs, and other revelatory material is worked into interviews and footage starring Nilsson and his family, John Lennon, Yoko Ono, Ringo Starr, Micky Dolenz of the Monkees, Randy Newman, Dustin Hoffman, the Smothers Brothers, Jimmy Webb, Brian Wilson, Paul Williams, Robin Williams, Terry Gilliam and Eric Idle of Monty Python’s Flying Circus, Stanley Dorfman of the BBC’s Top Of the Pops and In Concert series, Al Kooper, Mark Hudson, Danny Hutton of Three Dog Night, and others. The film is available on DVD from Lorber Films.

“In their marriage of ten years, Nilsson and RCA were the archetypical odd couple,” Sandoval writes. “He certainly was a talented beast: a prodigious songwriter, possessor of one of the most remarkable voices in popular music and a charming, intellectual wit. Through his music, Nilsson interpreted life and longing in a way few others have. . . Over some fourteen studio albums, [Nilsson and RCA] teamed for a musical aerial ballet. Nilsson did his song-and-dance on high while RCA held the safety net down below. The results were a genre-defying array of releases, no two alike in style or substance.

“This set represents nearly every recording Nilsson made under the RCA umbrella: remastered classic albums, alternate versions, single-only tracks, demos, foreign language one-offs, brilliance, whimsy, pathos and just a touch of sadness. This collection definitively documents Harry Nilsson’s gift to us all, a fearless feat of boundless creativity, direct from the center ring.”

(Note: THE RCA ALBUMS COLLECTION does not include Nilsson’s 1974 album, Son Of Dracula, because it merely adds film dialogue and incidental cues to tracks from Nilsson Schmilsson and Son of Schmilsson.)