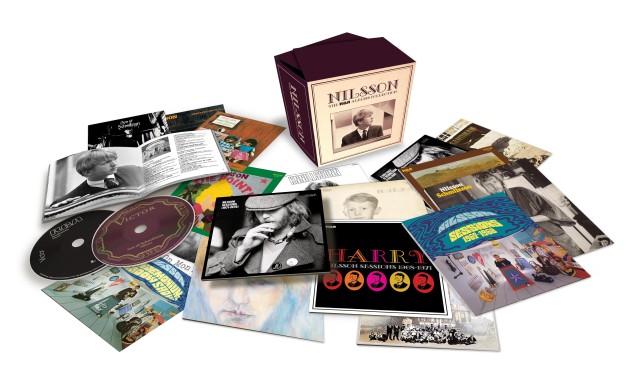 Today is the day we’ve all been waiting for! Harry Nilsson’s The RCA Albums Collection is in stores now and is earning rave reviews. You can hear some of the rarities from the box set at the MSN Listening Booth now, and read some reviews below in praise of Harry:

This box contains 14 studio albums Harry Nilsson made between 1967 and 1977, extended with hours of rarities. It is not overkill. It is the necessary account of a brilliant, wayward pop life. … He left a full life’s work in this box, with plaintive grace and irresistible design. Four stars. – Rolling Stone

This allows the work of one of pop’s true eccentric geniuses to be appreciated in its entirety. … Nilsson was a creature of the studio … creating recordings that evoked and influenced the times and, in doing so, transcended them as well. Seventeen discs may be an enormous undertaking, and admittedly some of the road is rocky, but the journey Harry Nilsson takes on The RCA Albums Collection is distinctive and thrilling, whether it’s heard for the first or 40th time. Four and a half stars. – AllMusic

Nilsson’s music was astonishing at the time, and seems five times that now. … He had, at his best, a gymnastic voice that accounted for the hits he had with others’ songs. … But it was his own music that was so much spiritual kin to the Beatles. … This is the full Nilsson on RCA that he wanted to see in his lifetime and that fans have always awaited but was denied him while he lived — outtakes, radio interviews and commercials, the works. Few complete sets of a performer have ever been more overdue than this. Few, then, are more welcome. One of the important box sets of 2013. – The Buffalo News