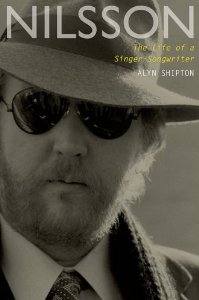 Harry Nilsson’s songwriting and multi-octave singing voice branded him as a rock music icon, but there was so much more to his story. He had a larger-than-life persona, a history of ribald adventures, famous friends, and an overall lust for life. Nilsson: The Life of Singer-Songwriter covers all these subjects and more.

… Throughout, biographer Alyn Shipton keeps the focus firmly on Nilsson’s larger-than-life character, which gave famous friends and collaborators and friends a run for their money. … Life of a Singer-Songwriter is his first biography of a rock musician, and it’s easy to see why he chose Nilsson. For all his rock ‘n’ roll eccentricities, he had a jazz-like artistry to his work.

Shipton had access to Nilsson’s unfinished autobiography and cooperation from his widow Una and sons Kief, Gary, Drake and Zak and daughter Annie. Other interviewees included Stuart Grundy of the BBC, Eric Idle, Perry Botkin Jr, May Pang, Van Dyke Parks, Samantha Juste and Jimmy Webb. If you’re unfamiliar with him, you may be confused by all the fuss over an artist whose mainstream fame was so brief. You’ll know why after reading Nilsson: The Life of a Singer-Songwriter.

Read the complete book review at Something Else!